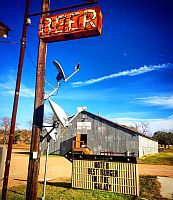 HISTORY: Handbook of Texas Online: "The earliest known settlers in the area were George Cauley, Ben White, Sr., and a man named Jacobs. The town dates from 1877, when Fritz Wilke, George Maenius, and John Petri moved from Fredericksburg seeking new grazing lands for their cattle. Wilke, a blacksmith, bought his land from a man named Elmeier, who was murdered in a robbery several years later. The town was originally called Martinsburg after an early settler and was a stop on the Fredericksburg-Blanco stage route. The Martinsburg post office operated from 1877 to 1886, when mail was routed through nearby Hye in Blanco County. In 1892, however, Martinsburg got a new post office and a new name, thanks to Albert Luckenbach, who sold his store in Luckenbach, moved to Martinsburg, and opened a new post office, which he registered as Albert. The first local school was established in 1891, and in 1897 postmaster Otto Schumann opened the town's first store. The Albert Echo, a singing society, was founded the following year. In 1900 a new school building was erected; there the young Lyndon Baines Johnson was enrolled for a year. A local Lutheran mission was established in 1902 and eventually grew into what was often called the Lutheran Church of Stonewall, which Johnson attended. Albert had fifty residents in 1925, four in 1964, and twenty-five in 1972. By 1985 the store had been torn down, the school was a community club, and the town's dance hall was partitioned and used for storage; Albert still had twenty-five residents and two businesses. The reported population in 1990 and again in 2000 was twenty-five."

See Wikipedia: "The area was first settled by George Cauley, Ben White, Sr., and a man named Jacobs. Around 1877, blacksmith Fritz Wilke, George Maenius, and John Petri moved from Fredericksburg seeking pasture for their cattle. Wilke bought land from a man named Elmeier, who was robbed and murdered years later. The Martinsburg post office operated from 1877 to 1886. In 1892, Martinsburg got a new post office and a new name, after Albert Luckenbach sold his store in Luckenbach, and arrived to register a new post office in town, under the name Albert. A school was established in 1891, and in 1897 postmaster Otto Schumann opened the town's first store. In 1900 a new school building was erected where Lyndon Baines Johnson was briefly enrolled. A local Lutheran mission, the Lutheran Church of Stonewall, was established in 1902 which LBJ attended.

The town was a stop on the Fredericksburg-Blanco stage route and in 1967 became a stop on the President's Ranch Trail. In late October 2007, the town was put up for sale on the auction website eBay.

AVAILABLE SERVICES: Gas: no; Convenience Stores: no; Restaurants: no; Lodging: no; Grocery Stores: no; Banks: no; Vehicle Repair: no; Hospital: no; Med Clinic: no; Post Office: no; Public Schools: no; Cemetery: yes

NOTE: The Albert Ice House is the only business here and is "the town". It is a very popular biker destination because of the remote setting, huge oak trees, music and "cold beer". It is adjacent to the 85 year old Albert Dance Hall (which remains intact) and the historical school referenced above. Pecan and peach trees in area. The entire town of 13 acres is one property.

NOTE: Postal addresses carry the name of the nearby post office in Stonewall.
We welcome inquiries, comments and submission of updates, additions, corrections
& digital photos, without compensation. Send to:
editor@HillCountryPortal.com 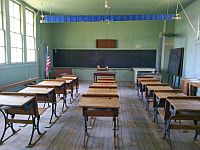 This historic limestone schoolhouse was built in 1897 and consolidated with Fredericksburg in 1950. Future President Lyndon B. Johnson attended in 1921. From the historical marker: "Established to serve the rural Albert community. the Williams Creek School, also known as the Albert School, began in 1890-91 near the creek in 1897. Trustees approved construction of a stone schoolhouse at this site. They enlarged the school to two rooms in 1922, constructing a frame addition clad in brick-faced metal siding. A dogtrot separates the two main rooms and the original bell tower became a central feature. For one year, the young Lyndon Baines Johnson, an area native, attended the school, which merged with Stonewall in 1950, and the building has since provided space for a community club, which meets regularly, as well as other local events." Now also serves as the Community Center and can be rented for social functions. See more details above in History and Marker sections. See Gillespie County Historic Schools Profile including town and school history and pictures. Facebook